A Day Full of Green and Rainbows - Part 1 (getting ready)

Another Holiday and another day for me to have fun!  My husband thinks that I like the holidays more than the kids.  Maybe he is right, but I get the most joy out of seeing the kids so excited.  I also decided that he probably wishes I put as much effort into cleaning the house as I do in destroying it with all my projects :).
The holiday began on Wednesday.  I decided to make rainbow cupcakes found on familyfun.com.  I think they are SO cute, but they are a little bit of work.  Plus they only make 16 versus the 24 so if you want to make them for school or something similar you may have to make 2 batches.  Although if you don't eat a ton of cake it cuts down on the amount cupcakes you have on hand.  I made them for the kids' lunches plus took them to my scouts.
Here is how I made them: 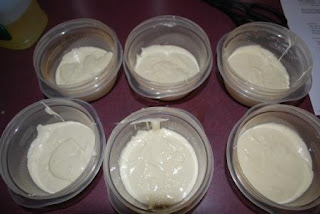 By small I don't mean very big.  To give you an idea I used 2 cup containers and it only filled it this much: 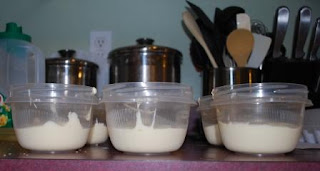 Dye each bowl a color of the rainbow.  They have the formula on the link above, but just in case you are lazy like myself and would rather have it all in one place I'll give you what I followed:
Red: 18 drops
Orange: 4 drops red, 12 drops yellow
Yellow: 12 drops
Blue: 12 drops
Green: 12 drops
Purple: 9 drops red, 6 drops blue
FYI - Make sure your food coloring isn't almost gone.  I also didn't compare the bowls to make sure the batter was even (though it was close) so I used the one that I thought had the most as red since that was the top color. 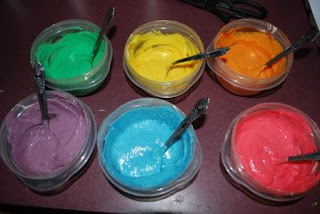 I used those teaspoons pictured above to put one scoop into the paper cups.  I then used the back of the spoon to spread out the batter.  The purple is spread out and the bottom left corner shows the blue one spread on top of the purple. 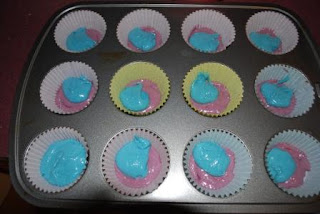 I found that if I used a swirling motion (twisting of the spoon from the middle to the edge) I was able to spread the batter easier and smoother.  Also I noticed that I tended to make scoops bigger when I first started than when I ended so  I varied my starting place.  You won't get more than the 16 cupcakes so make sure you go ahead and use all the batter.  Color order: purple, blue, green, yellow, orange, red.  Then the top color of the rainbow - red is the top color of the cupcake. 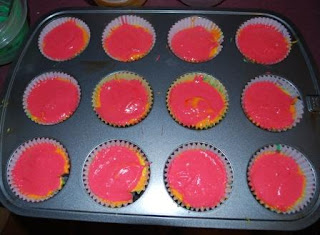 Here is what it looks like finished (I didn't take a picture of it cut in half, but I think I may have one left ~ If I do I will do just that). 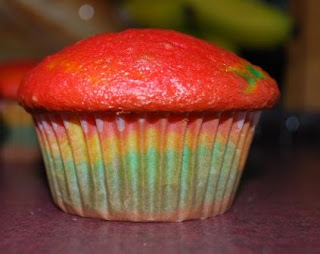 Here is a top view: 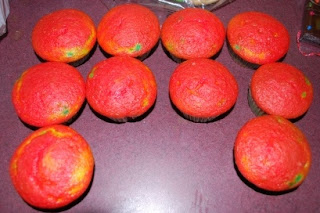 I just added some white cloud frosting and some 'gold' found at the end of the rainbow:  Not the prettiest topping, but I was out of time before scouts started ~ they only cared about the treats anyway.  They did like the rainbow however! 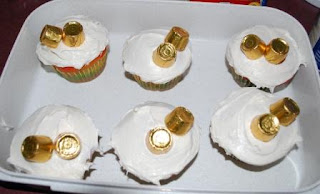 Speaking of scouts (which is where I left off before the cupcake pictures) I also made them these cute little handouts found here. 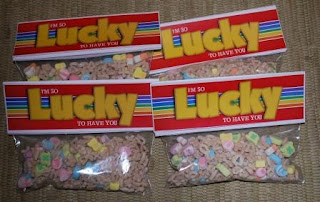 We also took a break from the bear book and decided do something fun.  I gathered up some boxes and other containers (can, egg carton, etc), some craft sticks, string, glitter, green and gold paper, and Rolos.  Brought some glue, tape and scissors then asked the boys to make some leprechaun traps.  I even hauled my camera there with all that stuff, but completely forgot to take pictures.  They did pretty good especially since I had my 7 year old with me and I was helping her make one most of the time.  Here is what they came up with (when they had them laid out around the house): 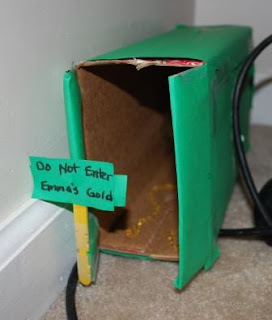 Boo's Trap: Used a Capri Sun box.  She covered it green paper and put some glitter gold inside.  She decorated the outside with a 4 leaf clover and a rainbow.  She put a Do Not Enter sign on the outside because we all know Leprechauns don't follow the rules.  We took the plastic container the cupcake liners came in and punched a hole in it.  We tied a Rolo to the end and strung the string through the container and up through the box.  The string was taped lightly to the top of the box holding the container up.  When the leprechaun pulled on the gold Rolo he would release the plastic cup trapping him inside.  She didn't catch him, but she did catch a few green coins and he left his footprints there!  She was so excited the next morning. 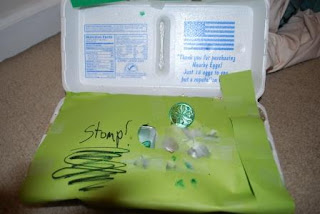 Bug's creation.  He wasn't too thrilled how it turned out, but he created it himself and used his imagination.  The Rolo was in one of the holes and the leprechaun was supposed to stomp on the paper and fall through getting caught.  As you can see the leprechaun left some foot prints and green coins, but didn't get trapped!
Like I mentioned before all of our activities are at the same time so I brought a treat for those that I visit teach that I knew would be there.  I fully intended on delivering the other two the following day, but I didn't have the time to do it and get my dinner made. 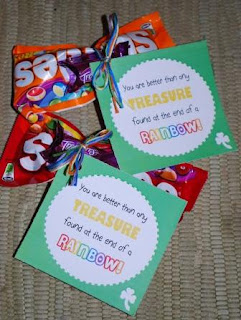 The saying reads: You are better than any Treasure found at the end of a Rainbow!  It is attached to the rainbow candy: skittles and a treasure candy.  I fully intended to take a picture of the bag the candy came in, but got caught up in getting projects done I forgot.  It is a purple metallic bag.  The pieces are individually wrapped and say Treasure across them.  I wasn't even sure they existed, but went looking specifically for treasure candy and was so excited to actually find some!
Download all the St. Patrick's Day tags here!
I also stayed up way too late making gifts for teachers.  After starting to substitute last year I began to comprehend how much time and effort our teachers put into our child's life.  Face it they are with them for 6 1/2 hours + a day.  That is a lot of time in our child's life.  I decided that I would try to show my appreciation for them a little more often even if it is in small ways.  I had bigger plans this year, but working full time for the first time in years I wasn't able to pull it off.  I have an idea though so maybe I'll try it out next year!  Anyway back on the subject, I scoured blogs and found some fun candies and viewed other people's creative genius at work.  A few ideas popped into my head and this is what I came up with: 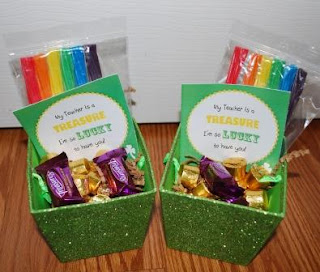 These were for their teachers and Boo's paraprofessional.  It had Twizzler's rainbow licorice in a bag with gold candy (Rolos) and Treasure Candy.  When assembling your rainbows remember Roy G. Biv 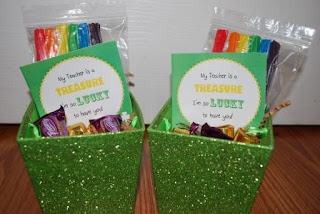 I made these bags too: 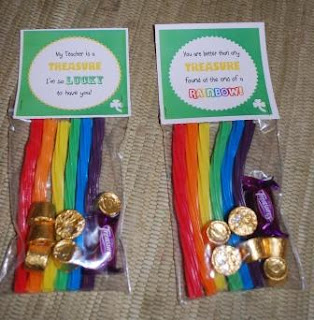 Our schools are lucky enough to have specialists: 2 PE teachers, a music teacher, and art teacher, a computer teacher, and a Librarian (fingers are crossed that we don't lose ANY of these guys with all the budget cuts).  So I made them these (after subbing for them last year I realized how much work these teachers do as well and how little thanks they get AND they have the WHOLE school to teach!): 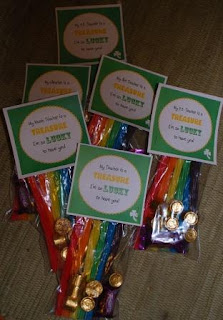 The tags were modified to say Librarian, Art Teacher, etc.  I filled one of the 4x6 bags with some fun treats just like the other teacher's present: Twizzler rainbow (there is enough in one bag of Twizzlers to do five rainbows and YES, they have the SAME amount of each color ~ that was a great help!), Rolos and a treasure candy.  I had to trim the licorice to fit into the bag.
Then I was thinking that I keep ignoring the middle school teachers.  After all there are 7 (okay 9 since all three PE teachers work together) and I keep thinking that is SO many.  Then I realize that I just made 9 gifts for elementary teachers.  Hmmm, what could I do?  I took what was left of the candy and assembled some more bags: 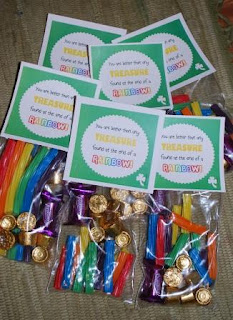 They had the cut up licorice in it and the candy.  It wasn't quite as cute, but at least they weren't forgotten.  Actually some of them were (PE teachers) since I only had 6.  My new goal is to continue to find cute inexpensive gifts like these for the specialists AND middle school teachers.  I added specialists to the list last year (all my kids were in elementary last year) and now I need to incorporate the new set of teachers.  I'm not sure what I'll do in two years when they all have 7 + teachers!
I had someone say that they didn't download correctly for them.  If that is the case for you, please leave me a message.  I tried on two different computers and they worked for me.  Just in case I uploaded them to a different site.  To try that site click HERE for the same printables as shown above.


Link up to:
Tatortots and Jello
Kitchen Fun with My 3 Sons
I {heart} Nap Time
Flour Me with Love