I have to preface this post.  I had the whole thing typed up and when I published it, it disappeared.  I had spent hours on it, twice, and I lost everything but my first paragraph and picture.  I was so frustrated I couldn't work on it. It was put off to work on later.  I guess now is later.  It may or may not be as long/detailed as before.

For Teacher Appreciation week I saw some cute door make-overs over at Skip to My Lou.  I thought that it would be fun to do for my kids' teachers.  I decided to use their bulletin boards and make them over.
I loved the Recipe for Success idea and I had to use that one. 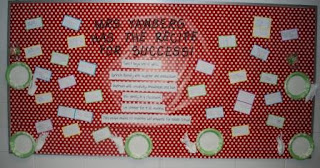 This picture doesn't do it justice, it turned out much cuter than I can show you.  My plan was to buy a red and white checked table cloth, but I forgot to hit the party store to see if I could find one.  I did have red and white wrapping paper so I used that instead.  The title was cut out with a die cut machine (or cricut or silhouette would do the same thing): 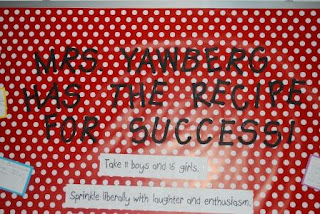 I
If I had to do it again I would have put plain paper behind it so that it would be easier to read.  I then put on the recipe. 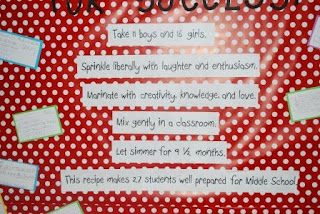 The top says Mrs. Yawberg has the recipe for success!  The recipe says: Take 11 boys and 16 girls. Sprinkle liberally with laughter and enthusiasm.  Marinate with creativity, knowledge and love.  Mix gently in a classroom.  Let simmer for 9 1/2 months.  This recipe make 27 students well prepared for Middle School.
I asked the students to write their own recipes of what make Mrs. Yawberg a successful teacher.  I photo copied their recipes and put them on the board: 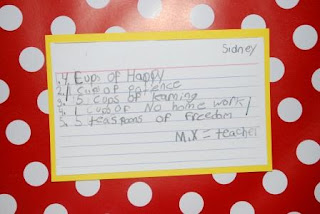 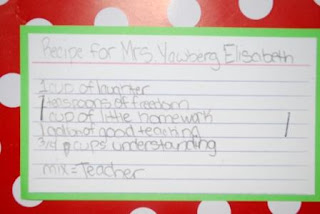 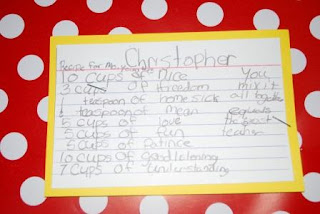 I stapled paper plates, plastic cups, and utensils wrapped in napkins around the board.
The original recipes I put in here: 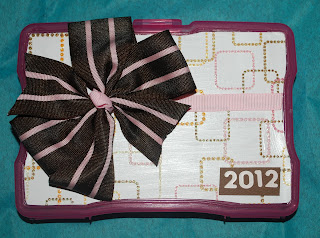 To make the holder I purchased a 4x6 photo holder from Micheals.  I mod podged paper onto the front.  I attached a coordinating ribbon with a tape runner.  I left a little gap to attach the bow. The bow on there is actually a barrette that I made.  I liked how it looked on it plus if she wanted to stack it she could remove the bow and have more room (or she could even use it in her daughter's hair).  I also put the year down in the corner.
To go along with the board I had the kids sign an apron. 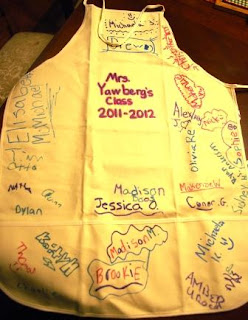 I wrapped it all together with another teacher gift for the week: 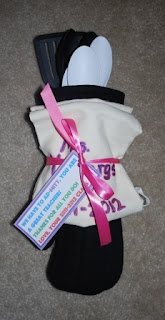 The tag says 'We have to Ad-MITT, you are a great teacher!  Thanks for all you do!'  It was tied onto an oven mitt filled with cooking utensils and the apron wrapped around it.

We were going to get all the kids' pictures taken in an apron and chef's hat, but I didn't have the opportunity to go in there to do that.  I wanted to put their pictures on the board next to their recipes.  It would have been so cute and added so much more to it.

The other board we decorated (for our second grade teacher) we used the M&M theme.  I have used this years ago, but it is pretty popular now.  I found a cute poem to go with it.
Here is the board: 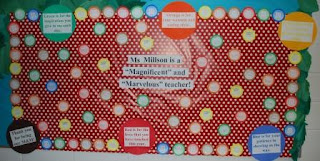 The center of the boards says: 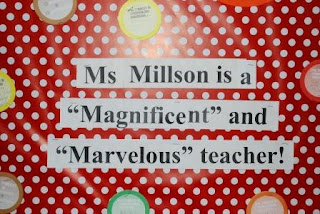 To make the boarder I cut out large circles (as large as I could get on 12x12 paper) in the color of m&m's.  I put part of the poem in each circle: 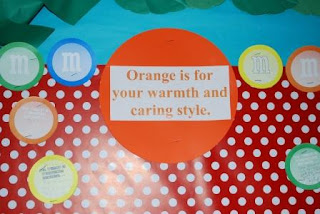 In between the large poem m&m's I put small ones.  In the center are m&m's that say 'Ms. Millson is magnificent because' and 'Ms. Millson is Marvelous because'.  The kids in her class each filled two of these out and then we hung them up: 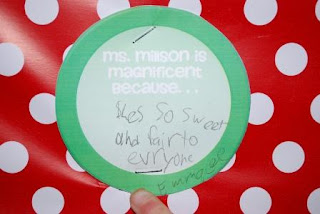 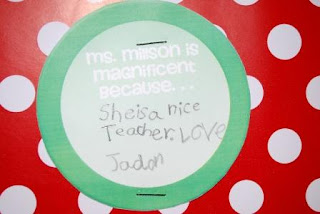 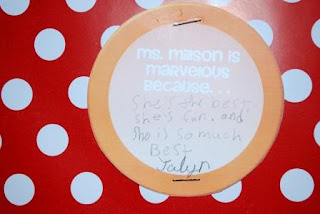 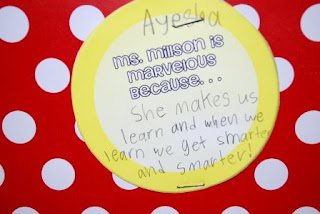 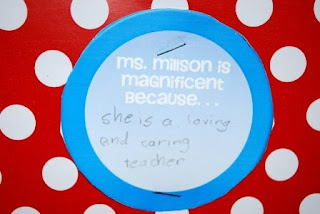 For her treat we made her a bucket of M&M's complete with the poem. I found a clear paint can bucket and filled it with m&m's.  I tied ribbon along the side in the colors of the m&m's. 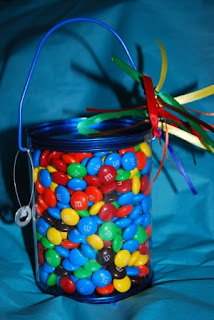 I also slid in a copy of the poem. 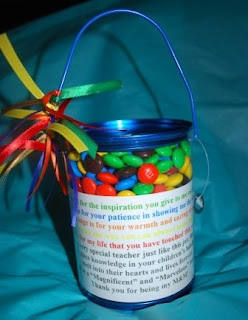 Both teachers loved their boards!  It was a great end of school year board too.  I think there may have even been a few tears.

If you choose to download, please become a follower first (on the right).  I'm happy to share my creations with my followers.  If you would like to leave a comment too that would totally make my day!