Here is another day I go a little crazy.  The funniest thing is that I hardly own any Dr. Seuss books.  It wasn't until recently that I realized how much I loved him.  He has some amazing quotes out there.  One day soon I plan to do something with all those amazing quotes I've found.  I just have to figure out what!  But for now, here is what we did this year.

No pictures, but for breakfast we had green scrambled eggs.  Nothing else.  There were plans, but I had to style two girls' hair, make lunch, and drop Sis off at school early (she normally rides the bus) and this meant leaving almost 1/2 hour early and of course when planning out the day I forgot that little tidbit until the night before.  You don't need pictures anyway, most people know what they look like.

My adventure started the night before.  I was scrambling around until after 11:00 getting as much done as possible.  First I made some Yertle Turtles. I had pinned a recipe to make your own rolo turtles and have been wanting to make them ever since.  So what better time than for Dr. Seuss' own Yertle Turtles? 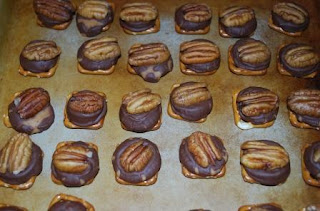 You can click on the link above to read her instructions, but this is the basics:  Line a cookie sheet with pretzel snaps (the square pretzels - there is more pretzel to hold the melted chocolate), place one rolo on each pretzel (if you get them in the rolls you don't have to unwrap each rolo, but if you have kids to do it for you, does that really matter?), bake for about 4 minutes at 350 (they shouldn't be melted - just soft), place a pecan half gently on top (my daughter helped and I think we over squished some of them).  Let cool and then finish the cooling process in the fridge.  Tada, Yertle Turtles!  With those Yertle Turtles and Swedish fish I made these for the teachers: 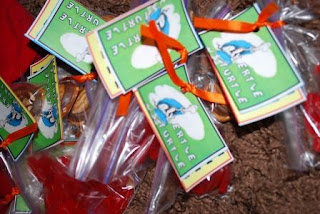 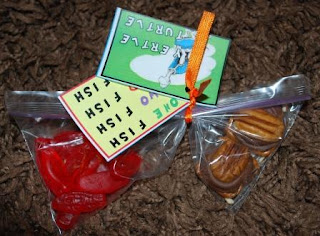 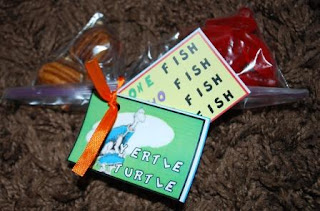 I copied and pasted a Yertle Turtle picture.  Using a Dr. Seuss font I did the writing for both signs.  I designed it to be a bag topper (like I did here for the Smeeps), but decided I wanted to separate the treats.  I tied ribbon between the treats, cut out the squares into tags, punched a hole in them and tied them on with the ribbon.  The Fish tag is a little bit longer so that helped since I layered them.  I tweaked the tags a little bit for you so they should be easier to cut as tags and big enough to fit on top of a snack size baggie.

You can download it here.
The other thing I made is Cat in the Hat hats.  During school one of the teachers I work with told me about this.  I had the ingredients so I gave it a try.  I must say hers turned out nicer than mine, but I didn't take as much time as I should have.  They still are cute (much cuter if you don't take close up pictures). 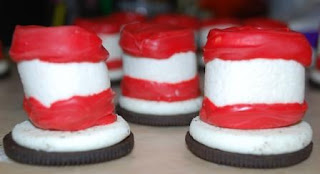 All it takes to make some hats are large marshmallows, double stuf Oreos, and red candy melts.  First you dip on side of the marshmallow in. 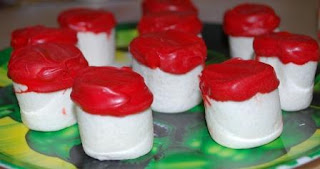 Let harden or put them in the fridge to speed up the drying time.  When dry dip the other end and place it on an Oreo (I guess the very first step is removing one side of the Oreo).  The black is the brim followed by white, red, white, red.  My tip for you is to use a small container to melt the chocolate in.  It works best if you can just dip it in as far up as you need to.  My container was too large so I used a spoon to help it along.  They weren't as precise or smooth as I would have liked, but they were just for my kids. 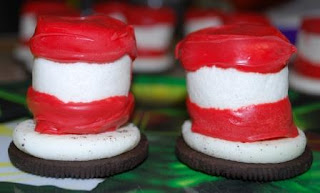 Having finished those items, boiling and dyeing eggs, and starting some of my jello I hit the sack.  In the morning while the kids ate their green scrambled eggs I was busy packing their lunch.  First the girls had One fish, Two fish, RED fish, BLUE fish sandwiches: 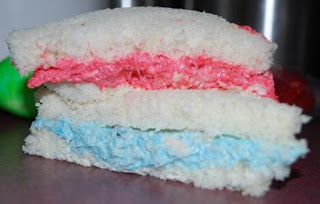 To make those I just dyed some tuna fish blue and red: 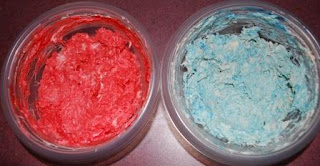 All of them had Fruit kabobs that looked like the hat of The Cat in The Hat: 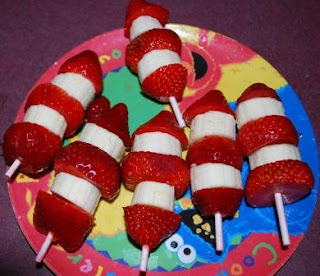 To make these you just take banana slices and strawberry slices and layer them.  You could try to match the widths better, but I was just trying to get them done. I put the bottom of the strawberries as the top of the hats. 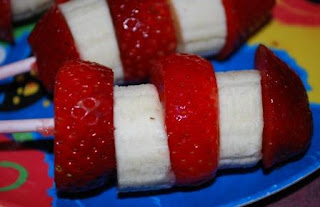 They all also had colored gold fish and jello from One Fish, Two Fish, Red Fish, Blue Fish and a boiled egg dyed green from Green Eggs and Ham.  I had Easter Egg dye in my cupboard from last year (yep, I really need to clean out that cupboard - now that I revealed that to the world I better get on it) that I used.  If you aren't a pack rat like myself you can use Kool-aid.  Mix on packet of green Kool-aid with 2/3 cup water in a small container.  And lo and behold you now have green dye! I learned this here. 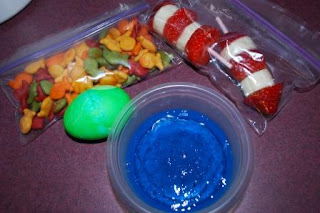 I made the blue jello the night before.  In the morning I whipped up some whip cream and put on some red fish.  I looked all over (okay two stores then I ran out of time) for blue fish or sharks, but I couldn't find them.  So they only had the red fish. 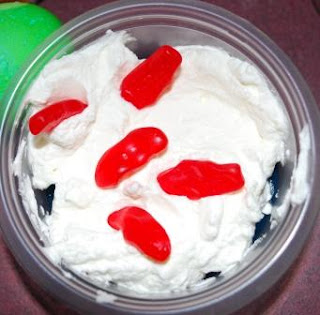 Here is my boy's lunch.  His sandwich was Roast Beast (beef) from The Grinch Who Stole Christmas because he doesn't like tuna fish: 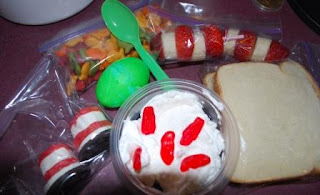 Oh, I forgot to mention I added the Oreo hats for dessert (I was raised with Jello being a side dish not a dessert and so are my kids).
Here is the post to the rest of our day: Hair styles and Dinner!
Posted by Wendy at 9:00 PM