For our Blue and Gold Banquet this year we used Space Exploration for the basis of our theme.  The week before we had the cubs make rockets for the table decorations.  Since the February theme is Resourcefulness we gathered items and let the kids use their resources and imagination to create their rockets.  We had paper towel tubes, toilet paper rolls, construction paper, glue, tape, scissors, empty cans, (I can't remember what else because I was at New Beginnings with my daughter and missed the activity).  The Wolf leader bought PVC pipe and had a topper on it already for her boys (those turned out so cute!).
Since I was at work I wasn't able to help with the set-up, but they did a great job.  The pictures don't do justice. 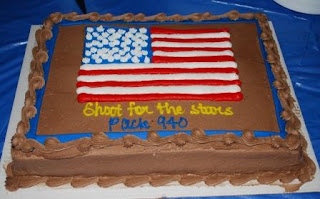 There was a huge cardboard moon painted on the stage.  It was textured and painted with glow in the dark paint.  They also attached a disco ball on the basketball standard.  You can't tell because of my flash, but the lights were off and the disco ball going.  It made it look like the room was full of stars. 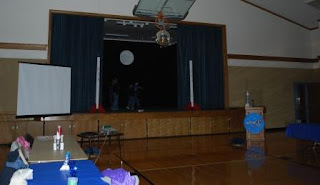 The podium had this cute sign that the young woman used for New Beginnings and we borrowed.  Without even communicating with each other it turns out we had similar ideas! 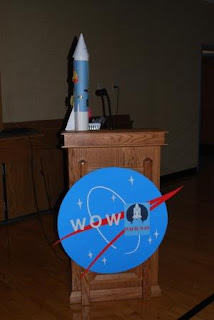 We had blue table clothes and rocket center pieces: 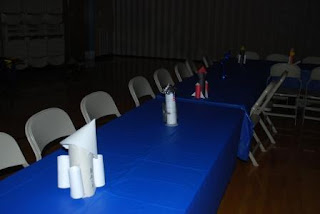 There were stars on the walls and some of them had crepe paper tails.  They were so cute!  This was the only food table.  It had cold water, hot water, ketchup, mustard, lettuce, tomato and relish on it.   The cake was on a table next to it. 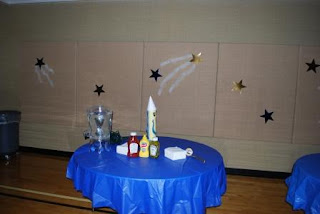 When they entered there was a table set up.  There were space badges for the boys.  They took a picture of an astronaut and photo-shopped in the picture of each boy.  I didn't make them so I can't share it with you and my son can't find his so I don't even have a picture (if I find it I'll add it).  On the table were also menus.  The catch of the night was that the menu was in code.  There were two choices in each category and they had to circle which one they wanted without really knowing what they were selecting.  We kept it simple for our purposes.  We gathered the menus and started to fill them in the kitchen while the program began.  For the program we had given the boy an astronaut to research.  Every astronaut was an eagle scout.  They were to highlight their lives.  Unfortunately they were told they had 2-5 minutes.  If you do this I recommend telling them to keep it to one minute (or even giving them the information to present or helping them write it at an activity).  We went way over on our hour time limit and didn't even do any of the activities we had planned.  Another item that delayed us is that we had the families bring in the food and the person that was supposed to bring hot dog buns brought hamburger buns so we had to do a quick run to the store.

Menu Printable
I wish I knew how to post a picture of the menu without taking a picture, but I don't so if you want to see how cute it is you'll have to download it!  The font is blue and we printed it on yellow paper (for the blue and gold part of the night).
Main Dish: Space Shuttle = hot dog, Flying Saucer = hamburger.
Salad: Alien Elbow = macaroni and cheese, Moon Craters = Potato salad.
Side 1: Haley's Comet = half banana, Crescent Moon = sliced apples
Side 2: Crispy Clouds = potato chips, Crunchy Stars = flavored chips.
Drink: Astronaut Juice = Fruit Drink (from the cannery, but it looked like Tang), Big Dipper = Hot Chocolate.
We followed it up with birthday cake like we do every year!
Having the families bring in the food left a few obstacles (besides bringing the wrong buns).  We hoped there would be enough fruit (that is why the bananas were cut in half) and one family was supposed to bring potato chips while the other brought corn chips or Doritos or something other than potato chips, but we ended up with all potato chips (but at least one person brought flavored potato chips).  It all worked out and was lots of fun!
The activities we didn't have time for (but we did the next week at the activity) was making constellations (passed off a bear requirement) and playing an asteroid game.
The asteroid game: We blew up balloons and they had to keep them afloat without letting them touch the ground or anything else (walls, tables, etc).  You could play it to music, but we just let them volley them up and when some were eliminated we made them sit down and stand back up in between each hit.  We also played it with partners were they had to hit it back and forth with their partners.  They could only touch it once then their partner had to touch it while keeping with the same rules.  This one was a little bit harder.
Constellations: We printed some constellations for the kids to copy.  They used start stickers to make their constellations and then put some glow in the dark paint on top of them.
Here is a picture of Bugs presenting his astronaut (as they presented they had on the big screen a picture of the astronaut): 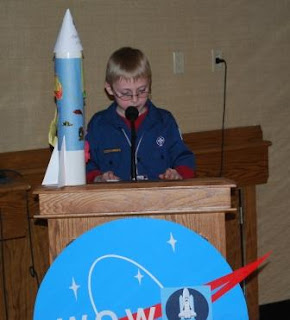 *****UPDATE: due to some questions, I reached out to my dear friend who is no longer living in the same state as me to find out where she pulled the astronauts from.  She found them here:
http://usscouts.org/eagle/eagleastronauts.asp  ******
Posted by Wendy at 8:07 PM