Now for the day of St. Patrick's Day fun.  First the leprechaun comes to visit.  He is never too naughty at our house (although with my house upside down with all the rearranging I've been doing a prank would've probably been to clean my house).  Every year the milk turns green, there are green glitter trails, plastic coins and sometimes a little extra surprise in my kid's shoes.  Leprechauns are little cobblers (hence the fascination with things being left in shoes) and I learned this year in Kindergarten that they make fairy shoes.  Last year in Boo's Kindergarten class the Leprechaun peed green in the toilet so it had to happen here too along with green footprints on the toilet seat. 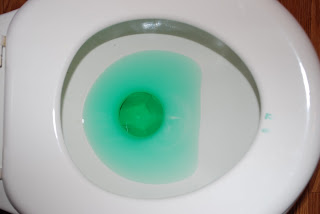 The footprints didn't show up so well in the picture and make a note: green food coloring settles so it has to be done not long before the kids come in.


There were green glitter trails to the traps the kids made, footprints along the traps, green coins in their shoes and in the traps, and a battery operated glow stick in their shoes.
Every year we make green pancakes with the milk that was dyed green (I add a couple more drops of food coloring), but we didn't get to do our green eggs on Dr. Seuss Day so I made those instead.
Lunch is green too (some years more so than others):  Sandwich cut with a shamrock cookie cutter, green grapes, Mix it yourself pudding (Boo loved this one), Koolaid or Capri Sun that had a green label, and a rainbow cupcake shown on the previous post, etc.  Here is how I made the pudding:  In a small container I put in 1/4 cup milk and in a snack baggie I put in 1 Tablespoon pistachio pudding.  I told the kids to add the mix from the baggie to the container and put back on the lid and shake.  It not only turns into yummy pudding (don't forget to tell them to let it sit for a couple minutes - Bugs tried to eat it as a liquid), but it magically turns green.  Boo thought it was great that the Leprechaun could change the pudding green!
After school was the fun for dinner.  I usually make an all green dinner and while it doesn't bother me to eat green food everything green is a little much.  This year I made a rainbow to go with all our green: 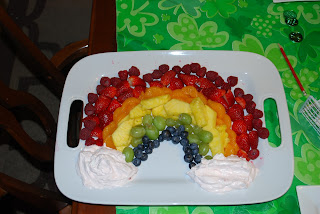 It was so yummy!  We love fruit at this household.  Red: Strawberries (and raspberries ~ I considered using these as purple, but they were more of a dark red and there wasn't really room for purple), Orange: Mandarin Oranges, Yellow: Fresh Pineapple, Green: Grapes, Blue: blueberries, Clouds: a strawberry yogurt/cool whip dip (take a container ~or two~ of strawberry yogurt and add a few scoops of Cool Whip to taste).  I thought about adding purple grapes, but wasn't willing to spend $2.49 a pound.  There wasn't really room on the platter anyway.  This is a pretty big platter (I've never filled it before), but I could have used more room.
I also added the green food to the menu.  I made green shamrock jello (instructions below), green rice (add some food coloring to the water), broccoli, pistachio salad and chicken tenderloin cooked in cream of mushroom soup - not green - I refuse to eat green chicken.

Now for the Jello instructions.  I found these for Dr. Seuss Day (and yes, I will blog about it, but I'm so behind).  I took two small packages of lime yellow and added 2 cups of boiling water.  Stir 2 minutes until dissolved.  Stir in 2 cups of ice cubes (not crushed ice).  The original instructions said to stir for five minutes, but I didn't.  I stirred until the ice slowed down in melting (if you have tiny pieces I recommend pulling them out now before it begins to set) and then I ended up adding a few more cubes to keep it cold.  While it was sitting on the counter with ice. . . 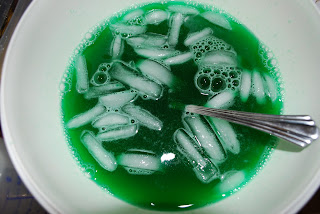 I beat some heavy whipping cream.  When it started forming peaks I added powdered sugar to taste (make it as sweet as you like it).  Then I continued beating until it was stiff (but not until it turns to butter ~ close though).
I forgot to take a picture of the Jello before I started filling the cups, but it will be kind of chunky.  Don't forget to move the ice when it is partially set like this: 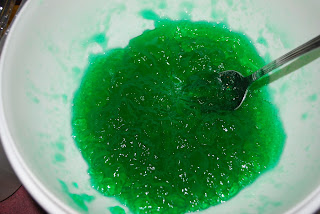 First I took the whipped cream and I put it in a Ziploc sandwich bag and snipped the corner.  I made it a little bigger than I wanted, but it turned out to be the perfect size. 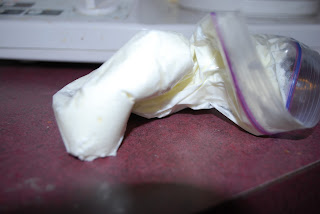 Then I took some clear cups (5 since there are five of us) and started making shamrocks.  The method that worked best for me.  Start towards the bottom and squeeze out a straight line going up.  Then I made three circles (if you want to call it that) next to each other until they touched.  The inside looked like this: 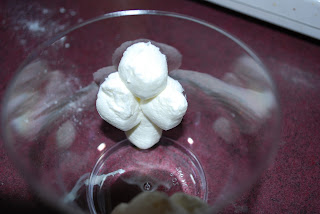 Then I rotated the cup and made one on the other side: 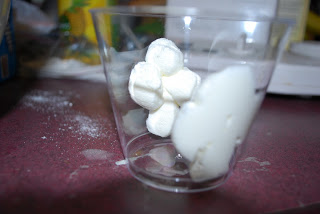 Then carefully spoon in the Jello.  Try to work a little fast because you don't want it setting up before you get it scooped in.  Make sure you go around the shamrocks without smearing, squishing, or ruining them.  Don't worry it isn't really hard. 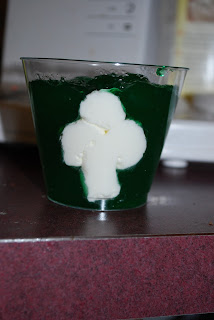 The top will be bumpy because it is already partially set up.  Next year I was thinking of making yellow jello the same way and putting it in black cups like a pot of gold.  (Maybe I'll try that for their lunch boxes).  Be sure to put it in the fridge so it can finish setting up. 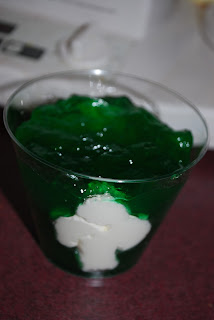 Finished product on the plate.  My kids LOVED this!  It was a great surprise.  The best part is that I finished them within 1/2 hour of dinner, but they were set! 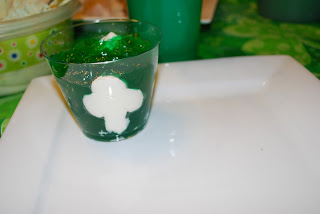 Here is dinner ~ a rainbow and various shades of green: 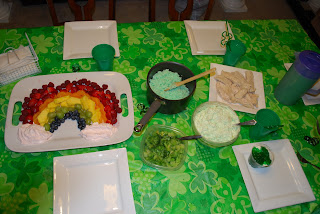 To make it a little more festive the kids had these fun four leaf clover straws and our shamrock table cloth: 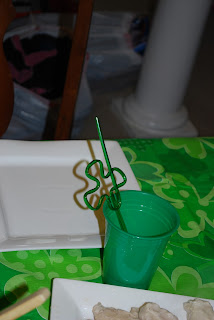 I probably left off a few things, but besides running around crazily after school it was fun.  I'm always crazy busy on these holiday, but the kids love it (and so do I) while my husband rolls his eyes and puts up with it.  I view it as creating memories.  And probably future crazy moms!


Linked to:
Flour Me With Love