The pennant flag banners are all the rage right now.  Well, my husband's birthday was last week and my oldest is always wanting to decorate the house for events such as this.  I decided to try my hand at a banner to help her out (plus they are so cute & I've been waiting for an excuse and enough free time to try one out).  This one is made with just paper (no sewing for me, I'm not that talented!).

I decided I would just print some triangles out on scrapbook paper and then cut them out.  I did dig out my cricut and figured out how to use it enough to cut out letters (once I get my new craft room/computer room done I plan to really figure out what this baby can do).  After seeing how easy letters were I wondered why I didn't try it out with the triangles!  Well maybe next time (or it could be because I own a total of 2 cartridges)!  But because I used the computer I have a printable for YOU!
First I took some scrapbook paper and copied this on the back: 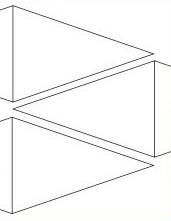 I actually used 12x12 paper and just cut it to 8 1/2 inches wide so it would fit in my printer.  I printed on the back - the white side - so the lines wouldn't show.  I cut them out and then folded down the small solid line (the top of the flag).  This created a fold to adhere the ribbon under.  I then took a ribbon and using scrapbook adhesive (I used runner dots, but a tape runner or double sided tape would work too) and secured the ribbon under the tab and the tab closed.  I also used it to attached my letters.  I wanted the dot paper to be my main paper and tried to find a few colors that matched it.  As I was in the process of doing these steps I decided to add another triangle to the back that matched the color of the letters.  This made each flag a little bigger, helped the letter color flow, and covered up the fold of the little triangle.  So I printed this: 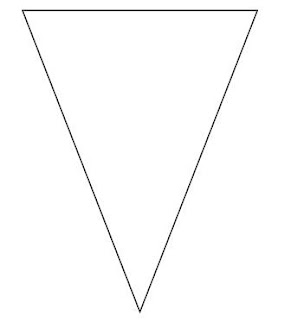 This time I just printed one on cardstock and used it for a pattern.  You can get 3 on a 12x12 paper.  Then I found out I couldn't count.  I was a sheet short so I used an extra blue sheet that was the same as some of the smaller triangles.  I do like how it added some color and variation.

I think if I had to do this again I would use the dotted paper as the background triangle and the solid colors on the inside so the letters will stand out better.  But then again, would I?

I didn't want to create a design/letters on my computer because it uses so much ink.  Scrapbook paper was a lot cheaper.  I used my cricut to cut out the letters, but you could print out letters and cut them out, write on the flags, or use a stencil.


Download here for small triangles (inside of flags).
Download here for large triangles (outside of flags).
Speaking of my husband's birthday.  Last year I through a 70's surprise party complete with Minute to Win It games.  I know that idea is done everywhere, but it wasn't as common a year ago.  I'll have to pull out the pictures and give you a few ideas of what I did for it.