The supplies you need: colored cardstock pillow Boxes (I used the Sizzix pillow box die cut & my Big Shot), 10 paper (color coordinating to the cardstock body) 3/4 inch circles & 2 black cardstock 3/4 inch circles,  two 1 1/2 inch ovals in the same cardstock as the pillow box, 2 orange cardstock hearts one at 1 inch and one at 1 1/4 inch, and two 1 1/4 inch white cardstock circles.   I used my Cricut to cut out the circles, hearts, and ovals but it can be done with punches as well. 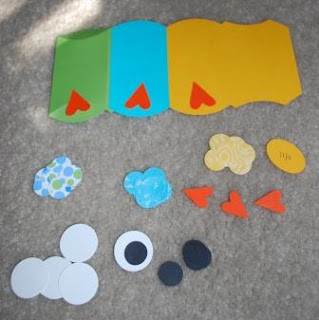 Lay out your pillow boxes.  Adhere your larger heart upside down to the bottom.  It will hang over the edge when folded. (I creased the green one to give you an idea of where they will fold at).  Angle them how you want.

Adhere three circles on the bottom of the pillow box.  I used a tape runner and put adhesive just on the top of the circle.  After they are all on I bent them up to give them dimension.  They look nice, but not putting adhesive on all of it they fell off easier.  Keep that in mind when you make yours.  I start with the middle circle and put it just above the crease (so the feathers won't hang off when folded) and line the two sides up equal with it.

The next row take two and put them above where the circles meet (I'm at a loss of how to describe it).  Cut another one in half and put it on the edges (straight side lines up to each side) to fill in the row:  Your row is basically going to shift so the feathers are staggered. 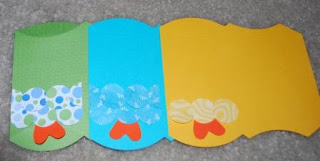 Add another row spacing it the same way as your first (the bottom) row (the green one is through this step, blue through previous step and yellow is the second step): 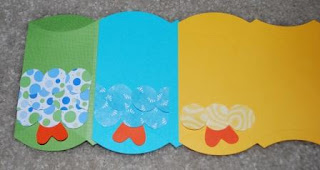 Take your last circle and cut it in half.  This is going to be the top row.  The flat side are up and I use the top of the circles to line them up. (click on picture to enlarge) 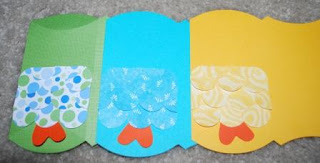 Then bend up the bottoms of the feathers (if you choose to) to give them dimension. 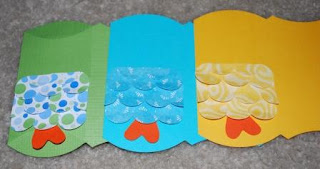 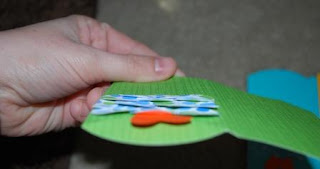 I adhered the black circles on the white circles before adhering them to the body.  Don't center them, put them closer to one edge.  They are going to overlap all over the place: each other, the beak, the feathers, the edge of the box.  Point them in various directions to give them their own personality. 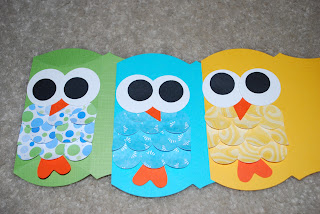 Then it is time to add wings.  Take your two 1 1/4 inch ovals and glue them on the sides.  This is where you cover up that little spot of cardstock left on the top row.  Make them point in different directions.  Why? Personality!  Did you forget already? 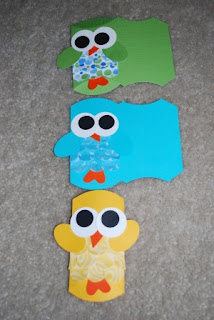 I didn't add bling to these, but I will before I give them away.  I didn't have any with the rest of my supplies and I wanted to be sure to get the tutorial done and posted.  When the bling is added they will look like this: 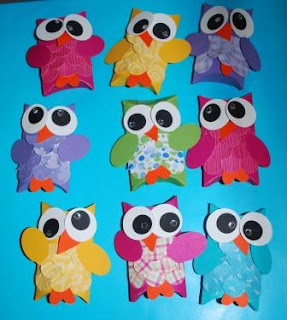 I played with using papers really close to the color of the body and some with more color.  What do you like best?  (The purple on the top right had some coming off. It is easily fixed, but make sure the circles are stuck on good).  I still think these are so cute!  To see the birthday party that these were used for click HERE!  I saw this idea on Pinterest here.
I linked this up to:
Tatortots and Jello