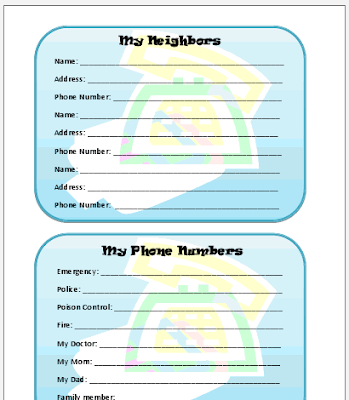 I put a crease down the center of the form (lining the forms up) and had the kids glue them together and then cut them out.  You can do this, but If I did it again I would cut each one out separately for them (boys do not know how to cut straight or that the pretty colors should be a border).  I would have a card stock cut in half for them to glue it to.  I also brought the local phone book to show them how to look up emergency numbers (right in the front on the blue pages).  I also explained that 911 is an emergency number, but there may be times to call police or fire departments that aren't emergencies so we needed those numbers as well.

Download form Here
NOTE - When it prints it is a solid line for the numbers although it looks like there are spaces.
Posted by Wendy at 2:00 PM