The oldest is just a teeny tiny obsessed with mustaches.  And while I told her last year that that was her last birthday party (until 16), I got a little excited with all the mustache items out there.  While most parties I viewed were little man parties, I knew we could pull off the teen party with similar items. 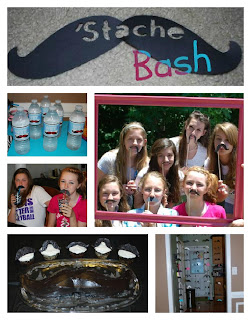 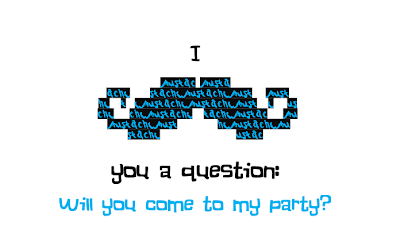 On the back I put in the party info and I designed it subway art style.  I can't share it though because my computer crashed and I lost all my fonts.  Now it doesn't show up the right way since I didn't save it as a PDF.


I used my Cricut to make most of the accessories/gifts.  I ordered the mustaches and glasses from the Cricut Craft Room.  I cut out a bunch of mustaches and made a curtain with them: 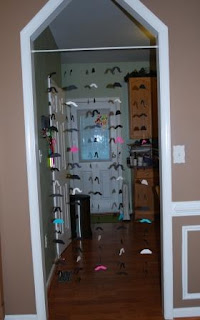 The colors of the party were black and white highlighted with blue and pink.  I cut most of the mustaches out on black paper with a few on white, pink, and blue.  Here is a close up of my son being silly, but you will also be able to see what I did. 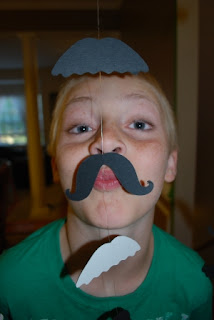 I took two of the same mustache, some clear beading line, and a tape runner.  I attached the mustaches together with the tape runner, securing the clear line in the middle.  The pattern on each string was: two black mustaches and then a different color, two black, another color, etc.  I tied the strings onto an inexpensive tension rod and hung it in a doorway.  The kids LOVED the curtain. 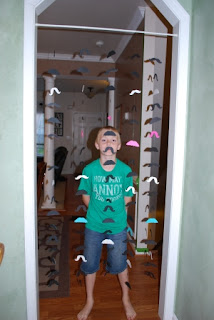 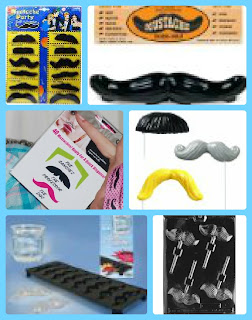 Oh, and I forgot to add the mustache sandwich cutter:

Let's start with the gift bags: 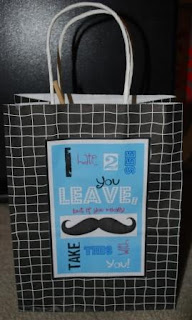 Here is a close up of the tag on the bag (well all except one word, read on): 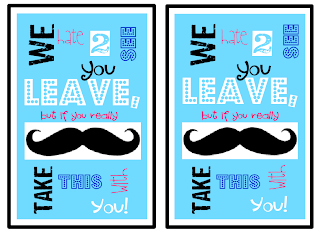 I actually saw this idea here.  I emailed her and she sent me her creations, but then I needed to change the colors to match the party.  So I used the same saying and created my own.  After I did so my daughter wanted it to say I instead of we.  You see the original was used at a one year old party so it was a gift from the parents and child.  My daughter wanted it to be just from her.  So I changed the we to I and we used the tape runner to put them on the front of black and white bags.


Inside there was a 12 inch mustache magnet (see below), an adhesive mustache (see picture collage above), a mustache glass filled with m&m's/reeses pieces and chocolate mustaches on a stick. 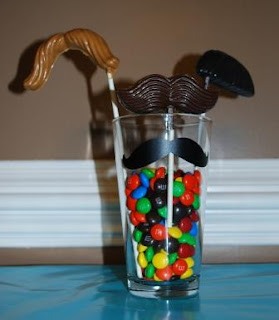 To make the glass I cut out mustaches on black vinyl and adhered them to the glass.  They now are hand wash only.  I put them where I thought it would look like they were wearing a mustache when they took a drink.  If I had to do it again I would put it a little lower. 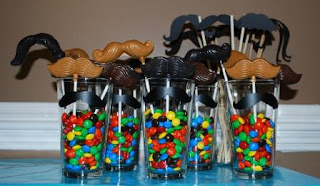 Mustache Suckers: I also made a bunch of chocolate suckers.  The light brown ones are peanut butter, the dark brown ones are mint, and the black ones are milk chocolate with black dye.  You have to use an oil based dye for chocolate.  Each glass has three chocolate suckers in it.  I had two molds (as you see in the above collage).  One mold made four of the same thing and one made three different ones.  We ended up with lots of the one style, but that was also the style we used the most throughout the party. 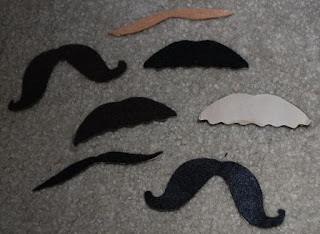 12 Inch Magnet Mustache: With the cricut I also made jumbo magnets.  I bought a roll of adhesive magnet and adhesive felt.  I cut a mustache out of both at 11 inches and stuck them together.  Here is what I learned: You can't put them together before hand because it is two thick and will slice up whatever item is on top.  The cricut does not cut through felt well, but if you use adhesive felt put the paper backing up.  It will cut through it and part of the felt.  You will have to trim it up, but it is a lot easier that way.  I didn't take a picture figuring I would take one of my daughters.  Well guess what, she doesn't know where it is.  Funny since that was her favorite thing!  When it turns up I will add a picture.

With the extra material I also made some small magnets and some stick on mustaches to go with the ones I purchased.


We had lots of Mustache shaped food. 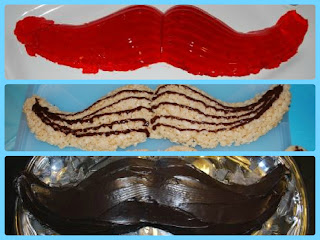 We had a large Jell-o mustache, large Rice Krispy treat mustaches, large mustache cake, I used the mustache sandwich cutter (pic above) and cut out thick sliced ham, bread, and cheese.  The kids then assembled their own mustache sandwich with the toppings they liked best.  There was a platter of chips, and water bottles for them to 'wet their whiskers': 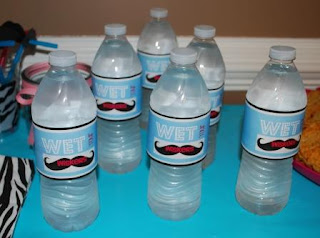 But we also had glasses with mustache straws:

To make the straws I used the good ol' cricut again.  I cut out mustaches, punched a hole in the middle and then slid it on a blue or pink straw. 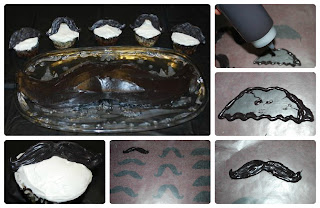 I kept cutting out mustaches on the cricut.  This time I hot glued them onto dowels: 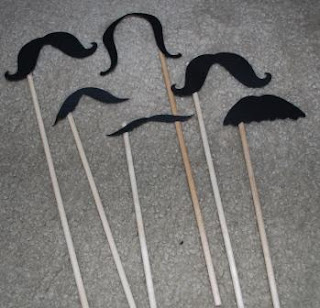 We used these for our photo booth.  I spray painted a large frame pink and they held the frame in their pictures.  We went outside with the woods as the background and took pictures of the girls with their mustache disguises. 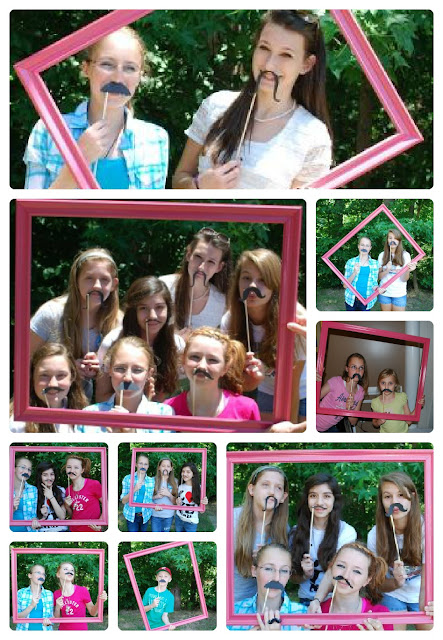 Games: As the girls arrived they decorated shirts.  I tried the bleaching the shirts idea.  I bought, shirts, bleach pens, some letter stencils and then I made mustache stencils and set the girls loose.  I had cardboard or thick newspaper in between the shirt.  I also put a plastic table cloth on my table.  The girls were very creative.  Some things to note: we bought black shirts and when bleached turn more of a rust color.  I would recommend a lighter colored shirt.  Don't use too much bleach.  I think the girls thought they needed a lot and they piled it on.  That only presented problems when we washed it.  Since they had so much extra it got on other parts of the shirt.  We started with this activity so I could wash them during the party.  Sorry no pictures I was a little occupied at this point. 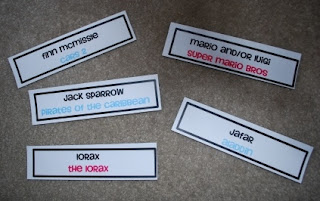 The next game we played is like Headbandz (I'm assuming this is how you play Headbandz anyway).  I used to play it where you put a character or item on your back and you would walk around asking yes or no questions until you figure out who you are.  It is a good mingling game.  Well, the oldest wanted to play it where you put the character on your forehead and went around in a circle asking yes or no questions.  We chose to play it Mustache Style of course.  All the cards had a character from a movie that had a mustache.  To make it easier we mainly used Disney movies or similar animated movies(but not all the Disney movies were animated).  I had the name of the character and the name of the movie to help the girls answering the questions.  The movies in blue are Disney movies and the ones in pink aren't. Again, no pictures of the girls playing the game, but I do have it for you to print and use.
The last game was Truth or Dare.  I HATED this game as a kid because everyone chose mean/evil things.  To prevent this there were questions made up ahead of time for them to draw out of a truth bag or a dare bag.  I used the internet for ideas and then printed them out.  Some of the dares below: wrap yourself in a roll of toilet paper, eat a teaspoon of mustard (three choices she went with mustard), have the person on your left do your hair, have the person on the right do your makeup while wearing a blindfold, take one bite of a sandwich that has one ingredient picked out by each member of the group.  They had a blast.  I had this game last so they could play until parents came. 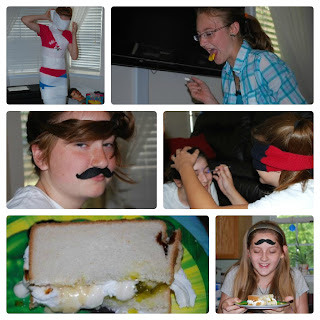 Here are your downloads:

If you choose to download, please become a follower first (on the right).  I'm happy to share my creations with my followers.  If you would like to leave a comment too that would totally make my day!